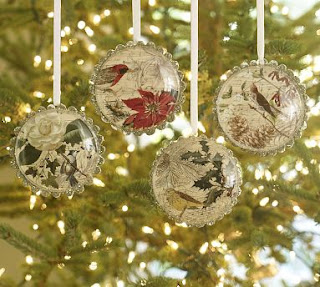 Happy Snowy Saturday, girlies! I want to show you another Crafty Secrets project that I made after I was inspired by these cool Pottery Barn ornaments! I loved the look of these ornaments but was thinking there was NO WAY I'd pay that price for them unless they were on clearance. Then the lightbulb went on in my head, that I own a FEW Crafty Secrets stamps and I could possibly recreate these myself! So I want to show you where I went with these ornaments as my inspiration! 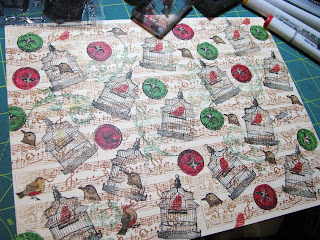 I started with a blank sheet of cardstock, and stamped music notes all over my paper (music notes from Crafty's Artsy Banner stamp set). Then I stamped birdcages, postmarks and birds (from Crafty's "Birdies" set) all over the sheet and colored them in with copic markers. This became the basis for my ornaments. 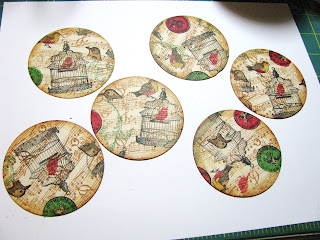 I used my Spellbinders Circle dies to cut a bunch of circles out of it. Then I covered the circles with Versamark clear ink, and then dumped UTEE clear embossing powder all over them. Once you heat up the Utee, the powder melts and creates a clear plastic sheen over the top of the ornaments. 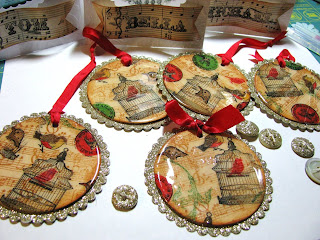 Then I just matted them with a scallop circle that had been covered in Martha Stewart white-gold glitter. I also repurposed some old ugly buttons I had, by dipping them in mod-podge and smothering them with glitter! Punch a hole in them, add ribbon, and you have cute little individual ornaments for gifting! 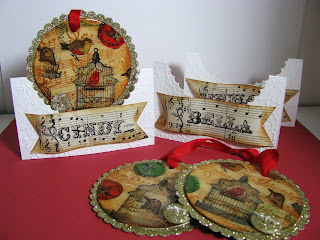 I also thought it would be fun to give these as favors for a holiday party, so I folded some embossed cardstock in half, and took a 'bite' out of them with a Nestabilities scallop circle. I used vintage sheet music and stamped names on them, and added them to the front. The ornaments sit right in the little holder, and the guest can remove the ornament and take it home with them! I also repurposed some old ugly buttons and covered them in mod podge and glitter, and hot glued them to the front of the ornaments for extra sparkle. 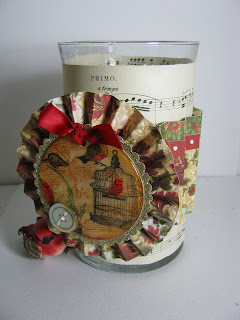 After I was done, I found an old cylinder vase and covered it in sheet music to make a candle holder for the center of the table. I used a medallion pinwheel for the center, and hot glued one of the ornaments to the middle. 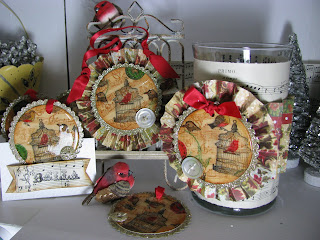 So there you have it; a cheap and fun alternative to going out and spending money on holiday decor!
Posted by Shabbychick Junk at 12:20 PM

What Vicki Said!!
Love these, Ma'am!

OMW...I saw these ornaments at PB and couldn't figure out how to replicate them. Imagine my surprise when I checked into your blog, LZ, and here they were....looking absolutely GORGEOUS! Dang Girl, you're a genius!!!!

Hi! This is my first visit and I LOVE these ornaments, beautiful!

For goodness sakes you totally rock! What awesome ornaments those make. Just beautiful!

Ohhhhhhh, LOVE these!
I remember sitting with you at retreater, you were an embossing fool, and I loved everything you made!!

So beautiful! I hope to try these out.
Kathy