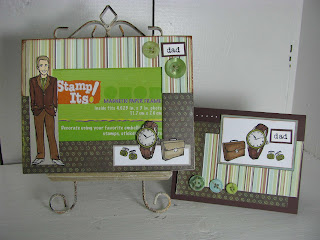 OH MAN! I've got so much for show & tell tonite! I hope y'all have coffee ready for the blah blah blah tonite because I've got lots to post! First off, its the beginning of the month and that means it's another Hanna Stamp set release! So I'll have 3 Hanna posts this week so I can show you new Hanna stuff. I spent some time Saturday in my stamp room and altered a magnetic frame from Target's dollar spot that I had in my cupboard. This new set is so GUY themed and cool... it features Hanna's newest hottie-guy, ANTHONY! 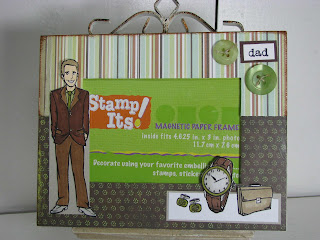 Anthony seems like an office kind of guy like my retired Dad used to be, so I thought he would be fun to use for Father's day in honor of dear old DAD! I covered the frame with Crate Striper patterned paper and mod-podged it onto the frame base. The Brown patterned paper is old "My Mind's Eye" paper. I colored Anthony in and then cut him out, mounting him on a piece of river rock paper so that he'd pop off the page. I also stamped his watch, briefcase and cufflinks, colored them in, and used a Sakura clear gelly roll glitter pen on the 'metal' parts like the edges of the watch face and the briefcase clasp. 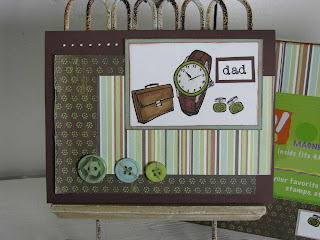 I made the card with the same papers and watch/briefcase layout, so that they would coordinate. I drew the dots in the upper corner with my beloved Ranger Inkssentials White Pen.

All of the new release sets will be up for sale at Midnight this Thursday! 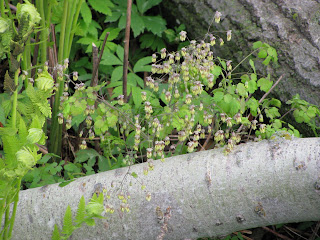 So I gotta tell you, I am in LOVE with my new camera! Although I have to admit I need more practice with the indoor shots, because I'm feeling like they're still super dark. I have to experiment with flash and zoom ,etc, to try and get good card photos! I'm doing pretty good with outdoor photos...I walked around the cabin this weekend with it and practiced some close-ups with it. This shot was taken from the road, zooming in on some cool little flowers across the ditch from the road! It looks so close-up, doesn't it?? 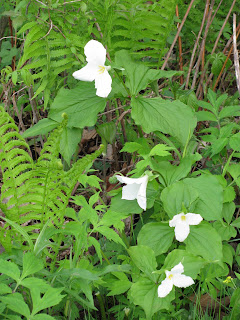 This is wild trillium & ferns that were growing in the woods. 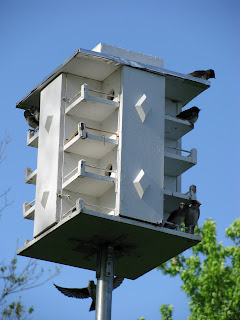 This martin house was crafted by my Grandfather a few years before he died. He'd be glad to know that the martins are moving in again, and most of the condos are occupied! Here' they're all sitting out on their balconies yelling at me to go away. 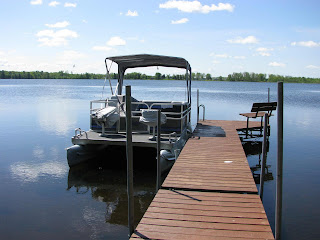 We had SUCH a beautiful weekend for the garage sale! Here's the view from our dock...look at how the camera captured all the poofy clouds on Saturday! 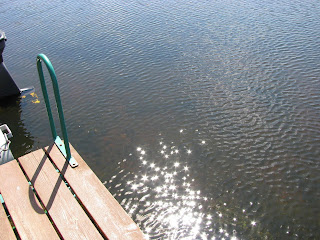 This is a crazy bad shot but I LOVED how the camera captured the sun glinting off the lake...it looks like little glimmery fireworks! The beauty of my new camera is that it's STUPID-PROOF, so even *I* can get shots...I just slap it on 'AUTO' and point and click! And it's got that 'no shaky' feature, so caffeine-girl here can get a steady shot every time!

So we're back to rain and gloom here in MN for the next week! That just means more INDOOR card photos & blog posts! Happy Monday!

I wanna come ride on the Pontoon! LOVE the pics.
Ree

Love the cards and congratulations on the new camera! :) Have fun experimenting and finding all of the fun things that it does.

Hey you! I'm loving your new camera so far, great pic's!! I'm glad you got a new one, looking forward to more eye candy!!

I love how you mounted Anthony, he looks real good like that ;) Yep, I spewed when I read that part on your post, LOL!!

Hey what kind of camera did you get!! Love all your latest projects on here!!

Yea on the new camera!!!How fun! Your pics are great! Love your frame and card too!

Love these. Love your pictures too.
LOVE the condo bird house.

Thanks for sharing the new Hannas. Congrats on the camera. What kind is it?
I love the Martin house. I dig those bird houses in the sky. It is on my list of things I would like. Yeah, I'm geeky.
Thanks and hope all is well. Drop by my blog whenevah you get a chance.
-Mary Lou