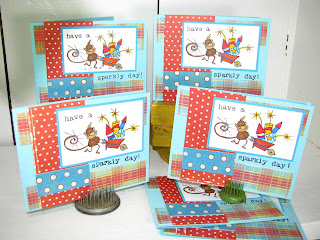 I'm in a red, white and Caribbean Blue mood tonite. I started some 4th of July cards over the weekend and decided to finish them up tonite. I was putzing with different layouts and decided that rather than attaching a sentiment tag to the front of the card, I'd leave a blank space to stamp "sparkly day". There were already so many different layers on the card that I thought it would be fun to "un layer" the sentiment! The cute little Changito 4th of July stamp is from Eclectic Paperie...friend Lana Lepinski stamped off a bunch for me to play with, so I thought I'd get them colored in and done BEFORE the holiday! 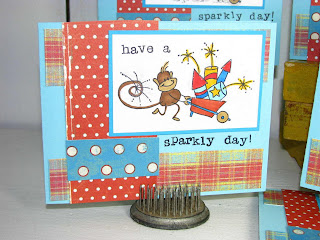 I just discovered E.P. has them ON SALE for $5.94, too, when I was linking them in my post! I may have to invest in this guy on my next order!
I colored Changito in with these Copic colors :light walnut, Light camel, Lipstick red, Golden Yellow, Cobalt Blue, Mint Blue, Brown and W2 (warm grey#2).
Paper is by Crate Cowgirl (polka dots) and Basic Grey "Lollipop Shoppe Strawberry Jam". 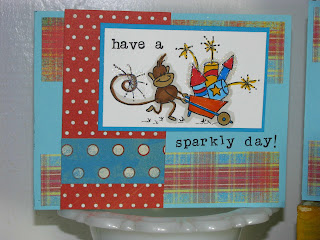 If you're a glitter-girl, here's a trick I use sometimes if I don't want the glitter to cover up my image colors: go around the OUTSIDE shadow of the image with glitter instead of adding it over the colored part of the image. You'll still get a glittery shimmer but will be able to see the vibrant colors as well! (check out a closeup of this darker shot to see the glitter!) 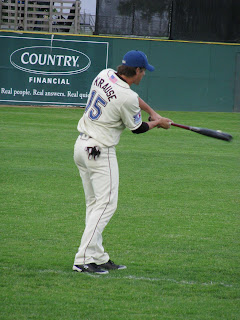 Speaking of red, white and blue (Baseball, Hotdogs & Apple pie), I thought I'd show you photos of where I was last night. Some girlfriends and I went to a St. Paul Saint's game & sat in the nosebleed general admission section. Which turned out GREAT for us because we got to watch the guys practice and warm up before the game! Doesn't this guy look like Ashton Kutcher? I don't really follow baseball but it was so fun to sit outside, drink beer, and check out the cute butts of the young-uns out on the field! 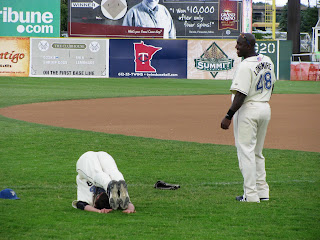 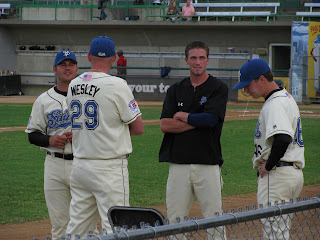 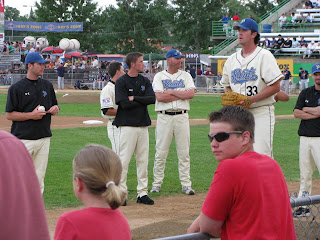 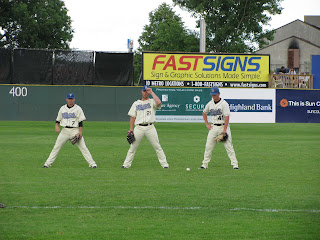 See no evil, hear no evil, speak no evil?
Maybe not. Anyway, we lost, but a good time was had by all. We sang Neil Diamond "Sweet Caroline" at the top of our lungs, so it wasn't all bad. :)
Happy Tuesday, everyone!
L.
Posted by Shabbychick Junk at 7:36 PM

Are cards are cute, cute, cute!! And it looks like you and your friends had a great time at the game and the weather looked like it was nice for you too!

I'd have sat up there with you LZed....what a hoot we'd have had! Looks like a SUPER fun time!

*take me out to the balllllgaaaame*

Love your red, white, and blue cards!!! So cute! Glad you had a good time at the ballgame!! ( personally, I only go there for the beer and food! LOL)

WOOHOO LZ! I love what you did with these guys! I can't believe the Fourth of July is coming up so fast!

You always crack me up! I've heard the Saints game are a riot, sounds like you had fun! Love your Changito cards, those little guys are so dang cute!

LOL!! Lisa.... I hear ya! I go see my hometown team..The Greensboro Grasshoppers for the cute butts..ummmm i mean guys and beer too....lol.LOVE the yoga shot.....
Cute cards.
Marie H.