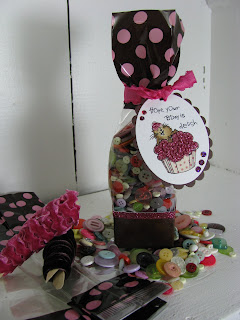 So I gotta credit girlfriend Lana Lepinski for the CUTE candy stand bag that I played with tonite. We stopped to see her in WI on our way home from CHA, and dropped off some gifts for her because she had surgery! Lana doesn't really understand the whole concept of GETTING gifts, because she sent us all home with bigger packages of loot than we gave to HER! Apparently the anesthesia from surgery had not worn off yet. These candy stand bags were in the bag of goodies she sent home with me! You can see her CUTER than CUTE version on her blog HERE. So tonite I sat down and played with the new Stampendous Eclectic Paperie Exclusive set, "Merry Muffins", available this Friday. 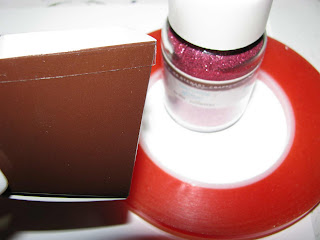 I started off by using my killer red tacky tape that I got from Creative Cuts and More. I outlined the top of the candy stand box with the tacky tape, and then glittered it up with some Martha Stewart hot pink glitter. 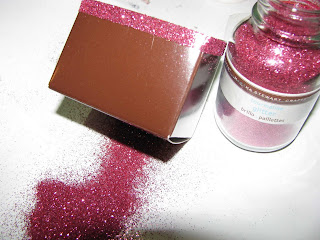 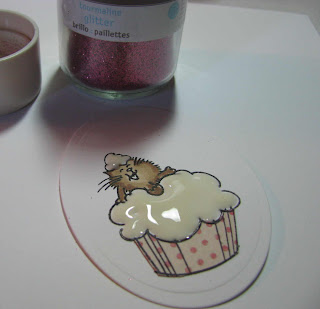 Then I used my nestabilities oval die and cut an oval out, stamped my muffin guy on it, and paper pieced the paper lining bottom with polka dot paper. I used Brilliance black ink and heat set it, then colored in fluffles with Copics (dull ivory, light walnut and light camel colors).
When I was ready for the liquid applique, I spread a THIN layer across the cupcake. THIN IS GOOD...the more you layer it on, the more it will grow & poof out too far....think of it as overloading the washing machine with laundry soap. NOT GOOD! 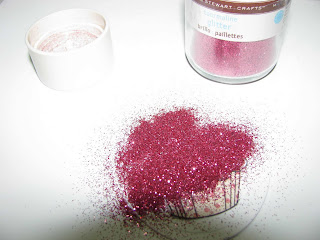 Dump your glitter on the wet liquid applique. Here I'm using hot pink, but on yesterday's sample, I used Stampendous clear glitter. Use whatever glitter you want...I like glitter that is has a finer texture...I think it sparkles a lot more. 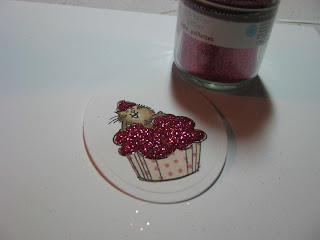 Dump off the excess glitter. Now we're ready for the heat gun. Heat up your heat gun, and give it a second to warm up. Then run the heat gun over the top of the glitter, and the liquid applique will puff up. Don't leave it there too long...as soon as you see it puff, it's done! 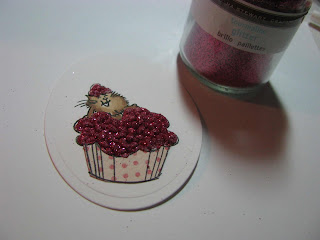 Here's what it looks like when its done. As SOON as I turn off the heat gun, I dump more glitter onto the hot liquid applique, for extra sparkle. 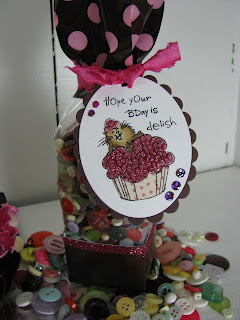 I added more Stampendous pink dot sparklers to the image, and then tied it onto the candy bag. (Notice that I've gotten a little smarter with my props....I don't buy candy any more for "display" purposes. Buttons are inedible and will not make my butt bigger. ) 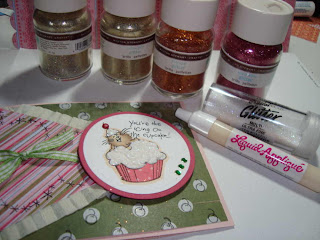 Experiment with different glitter colors to match your papers! Here's another sample done with the Stampendous glitter...I think this will be so fun to use for snow on Christmas cards!
EP Sneak Peek Gallery HERE
Posted by Shabbychick Junk at 7:31 PM


Is it okay for me to add you to my blog links?

Ok!!! I so need to get MS glitter..... i have been a snob thinking her stuff wasn't good enough for my stash(what do i know tho.... i am just learnin')....but you werked that glitter girl and if it's good 'nuff for you...Your Shabbyness... then i need to get me some! LOVE your work.
THANKS!
Marie H

Girlfriend, you absolutely AMAZE me!!!! WOW!

HOLY SPARKLE BATMAN!!!!!!!! But what is really making me have a heart attack is the buttons! YOU NEVER TOLD ME YOU HAD MILLIONS OF BUTTONS AT YOUR HOUSE!!!!!!!!!!! That's it! I'm coming over!

P.S. I thought your project included some baking? Ahhh what happened?

Absolutly love everything you create! You are an true inspiration... love it love it!

Wow!! Another excellent entry in a fabulous Blog!!

I simply MUST have that new Fluffles set!! Awesome job!

This is the cutest ever!

What a great idea with the liquid applique and glitter! I'll definitely have to try that! Super cute project!