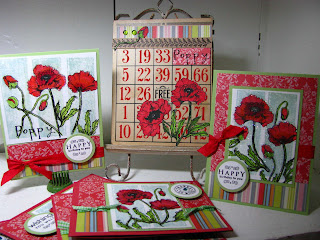 So I gotta tell you guys, I packed for the cabin last weekend with the LIGHTEST load of stamp stuff I've ever brought with me. I brought a small bag of stuff that was no bigger than 12" x 8" wide, and got so much done this weekend! I question why I try to drag everything AND the kitchen sink up with me, when after years of hauling crap, I just discovered that the key to productivity is to LIMIT myself to a few patterned papers and stamp sets! GO FIGURE! I brought 2 sets up with me, my new Flourishes Poppy set, and the peony set! And I made close to 20 cards! 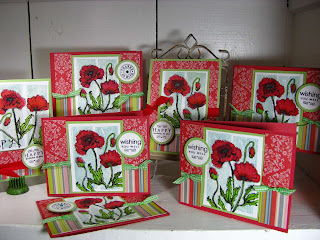 This is one of the cards I designed this weekend. ...I had to conserve patterned paper because I only brought a small K & Company Designer Mat Pad with "Lotus" patterned paper in it, so I used bits and pieces and scraps and was able to pull together these similar but different layouts. 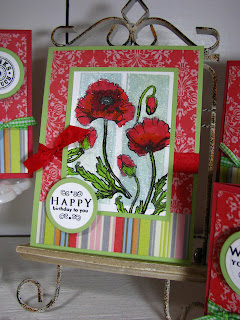 For the background of this card, I used a Hero Arts "Long" distressed background, and stamped it in sky blue (SU) ink twice. Then I stamped my poppies right over the top of it and colored them in with Cadmium Red & Cardinal Copics. The leaves are "Celadon Green". 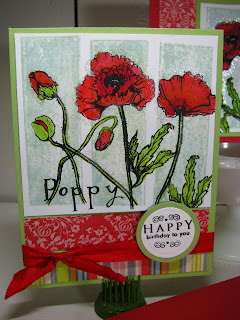 On most of the cards I used various Papertrey sentiments, from "Faux Ribbon" set. I mixed them up so that I had some birthday, thank you and get well cards. 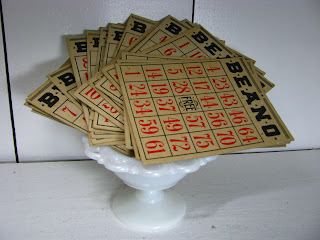 When I got to the cabin Friday night, my Mom had already been out garage-saling and scored a .50 bingo game from a sale. The game was actually called "BEANO"and was missing many of the game pieces for calling out the numbers! We were laughing thinking maybe it was a new version of bingo for, uh...gassier folks. Since the game pieces were missing I didn't feel one bit guilty for altering some of these great game cards; I LOVE the brilliant bright red numbers. 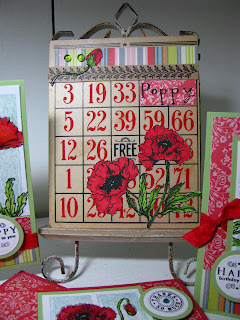 I used leftover scraps to cover the "Beano" up and then cut out some poppies to decorate the front. The little clear gems were gifted to me by girlfriend Carol Halvorson; she got a huge bag of clear stones that are actually for flower arranging. I took my celedon green copic and colored the gems in to match my paper & the poppie stems.

Hope you had a great long weekend and are settling back in to the weekday routine!

Zappa, I just said a potty word. Out loud. These ARE FREAKING GORGEOUS! YOu must send me one, my friend! I *love* when you power stamp!

WOW!!!Love the Poppies!!!!I need to come sit at your feet and watch the MASTER at work! These are BEAUTIFUL!!!YOU never cease to AMAZE me , GIRLIE!!!
Marie H.
(prayin'.... Dear Lord.... let me be half as good as her one day)

These are gorgeous!! Maybe you should limit your supplies more often. ;) I love what you did with the Beano game. Wouldn't that make a lovely gift: a bottle of Beano and a card made from the Beano game!

These are gorgeous LZ. I love the altered "beano" cards too!! Very funn!

Those are most beautiful flowers EVAH!!! I wish I could score some of the vintage finds you discover! Those Bingo cards are awesome!

I love your Beano boards! AWESOME! That is so cool! The Poppies are fantastic! Man you are on a roll!

So i was thinking:

Got Beano? (wouldn't that be a good t-shirt?)

Your cards are spectacular, and I love the Bingo (Beano) elements. Wonder why they were mispelled??? Seriously these cards ROCK..You should always take limited supplies, but you create such CREATIONS!! I had admired your talent for a long time. Fabulous work and always a whole collection!!

You did great!!! These are beautiful and I love your altered BEANO card!!

These cards are wonderful - love what you did with the Beano cards!

Wow, wow, wow, wow, and another wow. LZ ~ these are totally amazing! If only I could stamp like you! Gorgeous babe! Love ya, K.