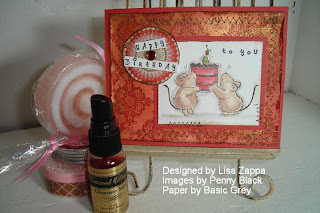 I'm back from CHA in Chicago! I'll have photos for you tomorrow night; the camera batteries are charging as we speak. They went on strike in the middle of uploading pics to the computer. I don't have many product photos for you; I didn't wander the show much, as I was working in the Crafty Booth most of the time. When I did wander out, I didn't think to bring a camera! DUH! But I'll have some pics for you of the great displays Sandy had in her booth. 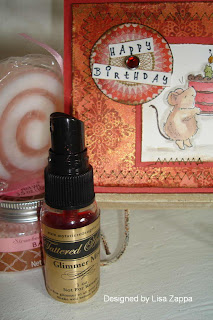 For tonite, here's a Penny Black image to check out. Joy and Daisy brought us all some fun stamped images from Eclectic Paperie, so I played a little bit with these little "Let's Celebrate" mice. The paper is Basic Grey "Blush" Devotion for the background, and the circle is cut out of their new "Infuse" Season line. Sandy and I stopped by the Tattered Angels booth and they gave us some sample bottles of their Glimmer mist to try out. I used their "Golden Terra Cotta" to spray a fine mist of glimmer on top of the background paper. Its the coolest stuff, it totally changes the look of the paper. I tried to get a close-up of it so that you can see the shimmer on the card. I think it makes this paper look very victorian-wallpaperish! Cool stuff! I feel a large order coming on! :)
Posted by Shabbychick Junk at 8:09 PM

Cutie card! HAven't made or created anything since Friday! It was so great meeting you in person!

Hi zapstar.....I miss ya!! I think your glimmer spray was a great find. Thanks for the heads up on that product!

See, I KNEW you and the Glimmer Mist would make a gorgeous couple!!! AWESOME!

That glimmer mist is fab! (So is your card!)

LZ, how do you always put a new twist to cards that turn out so adorable?! Toooooo cute babe!

Hey Lisa! It was great meeting you at the CHA! You are as nice as I imagined! I posted some CS pix at my Blog.

Welcome back! You were so missed!! I need my visit to your blog with my coffee to start my day off right!! Your card is cute. I must try some of that spray too. Technique Junkies newsletter uses a lot of those sprays and I feel like I'm missing out on something. Can't wait to here about CHA. I might sell SU just to be allowed to go!

Love your card! and the image. That glimmer mist sounds like it could be a must have too!

I say glimmer me silly - that is gorgeous!!!

EEEEEEEEK! This is such a FUN card - and a FUN product! I love what you do, girl!

Zappy, ya GOTTA hook me up with some of that glimmer schtuff when I'm there - it's beeeeUtiful! :)