The moose are loose!! 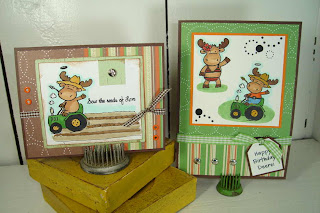 Kristi Ferro from Hanna Stamps just put the Rileys up on the Hanna Stamps website tonite!
The moose are on the loose & the frenzy has begun! I think that it's awesome that she sells the Rileys either mounted on a wood block ($6.95 each) or unmounted ($3.99) each. It makes them so affordable for everyone's budget! I got the unmounted ones, and all I do is put a little bit of hermafix dotto adhesive on the back of the rubber and stick them onto my acrylic block..the adhesive rubs right off. So don't be afraid to get the unmounteds if you *need* more than one Riley! 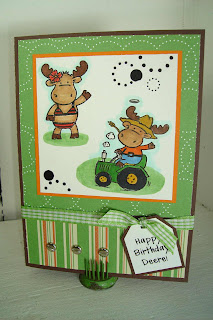 Tonite I played with the tractor Riley & bikini Sophie G...I had this image in my head of Sophie running out in her hottie little bikini to say Happy Birthday, Riley Dear (Marilyn Monroe style). So I used the play on words and misspelled Deere on purpose, since Riley's riding the green tractor. (I know it's a stretch...bare with me). AAAAAAACK. BAD JOKE.
When I've been coloring in my Riley's I've been using Copic Marker E33(Sand) for the bodies, and E57 (Light Walnut) for the hooves and antlers. On this card I drew clothes on Riley, to make it look like he's wearing jeans and a shirt. Can't have him riding the J.D. nekkid, now, can we? This is a G rated blog! 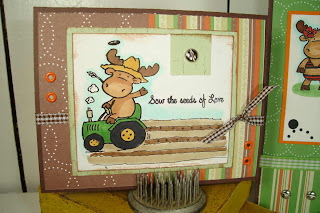 I also paired up Tractor Riley with the saying "Sow the seeds of love", from the "Things Hanna would Say" set. I thought it would be a great card to give to a farmer hubby or a son, who's been working hard out in the field all day to help out his family. I drew in the little messy rows in the field and seeds in the rows with a Copic Multiliner, then colored it in in with Brick Beige & light walnut Copics.
Hope everyone is having a great evening!
L.
Posted by Shabbychick Junk at 8:18 PM

Oh my goodness, Lisa. These are cute, and you are too, too funny, girl!! ROFL Can't have Riley on the tractor nekkid! LOL I think he looks nekkid on the other card, but it's all good! :D You crack me up! Kelly

Oh Lisa, Riley on the tractor is just toooooo cool! All of your cards are fantastic! I like each one better than the last! LOVE how your mind works!!!

Well, these certainly put a smile on my face! I love your color choices.Laurie

these stamps are just to cute!!

LZ your creations are wonderful. The colors are so bright and cheery. I like nekkid Riley roasting the marshmallows so what is wrong with being nekkid on the tractor. I understand you can get a good tan on a tractor !! LOL !!

Gosh all these Rileys are too cute. Great cards, and awesome smores kit from yesterday.

OH no way! Those are just TOOO CUTE Lisa!!