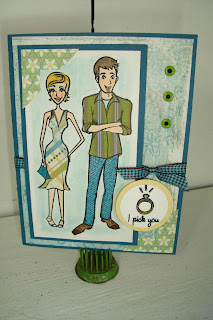 Tonite I'm going to post a variety of cards that I did for tomorrow's new release at Hanna Stamps. Many of the cards are similar to other designers cards on the team, so I thought I'd post my versions of them here before the release tomorrow. With such a large design team using the same sets, there's sometimes overlap of the same images, themes and sentiments. I think it's still fun to see how everyone's style shines through and see how all of the team uses those same images on their layouts! 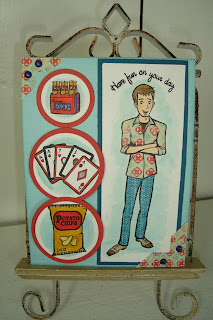 You can see the entire team's cards on Splitcoast by clicking HERE.

I had so much fun playing with these new releases...once I got started making cards with them, the ideas kept coming! If you're into the Hanna sets and have the girl images already, you have to have Mikey...it's so fun to stamp him with the various Hannas and the dogs! 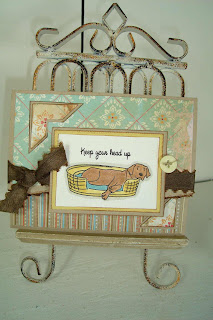 The 5 sets being released tonite at midnight are called:

Mikey (guy set)
Small Breed (dogs)
Large Breed (dogs)
My Best Friend (Hanna & Dog) and Get Physical (Hanna working out!)
I have 2 more samples that I will be working on this weekend to show you, so I'll have more next week with these great sets!

Happy Thursday, everyone!
Posted by Shabbychick Junk at 7:36 PM

These cards are adorable! Love the new sets!!! Gonna be so broke after this purchase! LOL!

These cards are so much fun! As always, very creative and beautifully colored!!! Great inspiration here! Thanks!
Darlene (SCS:akronstamperdpk)

Way, way cute! your work is beautiful, I love your colors and coloring. TFS.