OCL - Our Craft Lounge at CHA 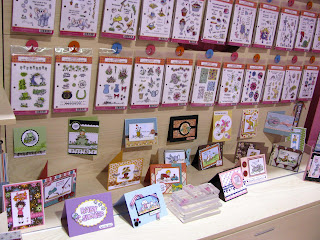 Hiya! I'm BACK and I'm multi-tasking tonite; I'm washing clothes & trying to upload & edit CHA photos! I spent most of my time working at the Crafty Secrets booth, so I don't have the MOTHERLOAD of photos this year, but trust me, I did get to sneak away and will have plenty to show you in the next few days! I tried to pop in to all of my favorite booths, and will show you the select highlights of what WOWED me this year! 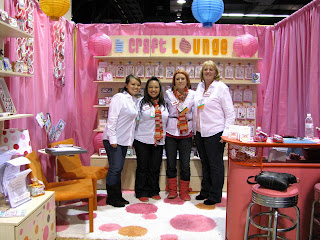 Here are the talented girlies from Our Craft Lounge, in their first-EVER CHA booth! I had no idea what to expect when I heard they were having a booth; but they BLEW me away with the cuteness of it all! The booth looked bright & LOUNGY, with retro bar-stools and a cute pink & orange bar to sit at while you did make & takes! 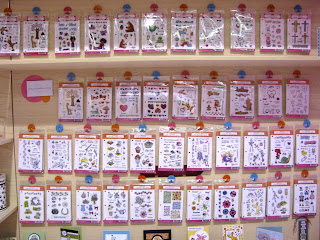 OCL is releasing over 20 brand spanking new stamp sets that will be hitting the stores mid-February, and I have samples to show you as well, since I helped do trade show samples for the booth! 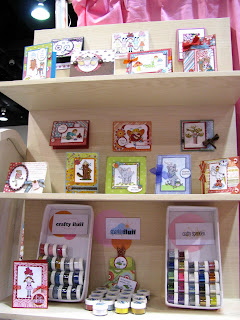 The OCL girls have a brand new product out, called "Sparklefluff", that is a mixture of glitter & flock! They had it in a big martini glass and it looked like fluffy ice cream (with no calories, of course)! They also have some cool new colors of flock. 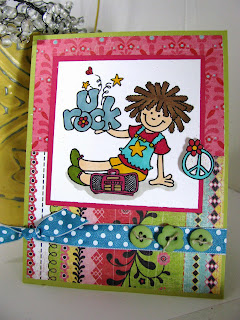 Here's a sneak peek of a new set that will be in the next release, called "Star Rocks"! This little boinky-curled chickie's name is Star, and she 'STARS' in at least 2 new sets! She's friends with Anna Mae and the other girlies from last release! 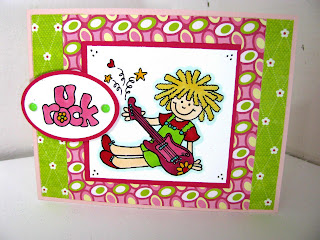 Star comes with lots of fun little accessories that you can mask off and put in her hands, like a guitar, a lava lamp and a stereo! 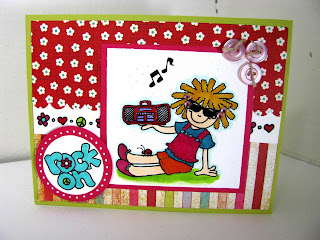 I don't think you can see it in this photo, but I used hot pink & orange flock to make her outfit fuzzy.
So I'm off to edit more photos; I have Graphix 44, Websters Pages, Doodlebug & Clip-it-Up booth photos to post soon!
Happy Thursday!

OH! I LOVE the Craft Lounge Pictures! LOVE THEM! Thanks for sharing!

What fantastic pictures! Their booth was so awesome!! Your cards are adorable! I was in the Crafty Secrets class and so enjoyed meeting you - I was the one you showed how to tie the bow with 2 loops!! I also learned that Vicki lives less than 2 1/2 hours from me! Wow~
Thanks for a great class!

Thanks for sharing all this, Lisa1 Your cards are adorable!!

Totally deliciously delightful schtuff! Thanks so very much for sharing these luscious peeks, LZ!